Jean-Denis Haas, or JD for short, was a kid of the 80s. It involved the usual. Falling in love with movie franchises like Star Wars, Ghostbusters, and Indiana Jones to spending hours in front of the TV watching Tom and [...]

The MSI P100 desktop managed to render out a scene in under 4 minutes. My old machine took about 27 minutes to render the same thing. It’s crazy

Many of us have spent hours watching movies like Star Wars, Star Trek, and Indiana Jones. However, it’s not often that someone who loved these things goes on to work on them as an animator. For Jean-Denis Haas, the journey from playing with Star Wars toys to contributing to movies has not only been exciting, but it’s also been sort of surreal, even after all these years.

JD Chilling with His Workstation

JD grew up in Switzerland like any other kid, watching cartoons, movies, enjoying music like any other kid. Today, he's a talented animator who can proudly reel off one blockbuster movie after another as part of his portfolio. Star Wars, Indiana Jones, Transformers, Avengers, and Chronicles of Narnia are only a few of the franchises he’s worked on! What’s more, he also teaches at Animation Mentor and the Academy of Art, his old school, tirelessly training a new generation of animators and artists.

Creativity and art weren't new to the Haas household. JD’s dad was a talented surgeon, and he also harbored a love for movies and music – ensuring there was always music in the house. In fact, "he's a jazz musician too and played the tenor saxophone," says JD. His mom was an equally talented artist who loved to draw. “I’m not,” JD chuckles, "I definitely didn't inherit her kind of art."

"I'm a child from the 80s. So, it's all the Disney Classics, Star Wars, Indiana Jones, Ghostbusters. Like, that was, that's basically my childhood"

Like all other kids, JD wondered what he wanted to do after school. "I was mostly interested in special effects, like twisters, explosions, and lightsabers. You know, that sort of stuff," he says. Some research online sent him to the Academy of Art in San Francisco. It is located close to Industrial Light & Magic (ILM) and Pixar, and for JD, being that close to the source of so many things he loved made the decision easy. He applied to join in the Fall of 1999.

However, once he got there, it didn't go exactly the way he’d imagined it. It turns out, special effects involved a lot of scripting and math; it was more technical than he expected. "Within a day, I switched my major to animation," laughs JD, and that was it! The journey began.

Once he was done with school, JD applied to every company he could find while working on his demo reel. He landed interviews with Sony, Tippet, Factor 5, and ILM. JD started as an intern at ILM in January 2004, and has been working there ever since!

It's all in the Details and the Right Inspirations.

As an animator, finding sources of inspiration can be tricky. Inspiration can come from anywhere. You could be browsing YouTube, Instagram, or Twitter and come across something that strikes. “The talent out there is amazing and also humbling,” says JD. He is active on Twitter and makes sure he can see other people’s work and showreels. It keeps him motivated.

Whether you're animating a scene in Star Wars or a personal pet project, the process remains the same. JD first starts out visualizing what needs to be done. JD nervously quips, "I often end up acting out animations myself, so I do have a lot of goofy footage that no one should see." It helps him get a better idea of the motion involved and how to make it natural.

"There's a LOT of embarrassing footage."

You have to think about the minute details. If you close your eyes for a certain amount of time, does it say arrogant or sleepy? In addition to tracking expressions, you also have to ensure that motion is as natural as possible. You have to address details like whether a specific moving part feels too weighty or stiff. It's the only way the result can look natural – keeping tabs on details.

Everything’s in the Details Around Us

Once you have a frame of reference, JD blocks out a rough pass of the animation in Maya. He uses Playblasts in Maya to get a quick preview of the animation. This allows animators to get a better idea of the final result without sitting through a full render, which requires substantial graphics and compute horsepower.

"Once I'm satisfied with the result, I can proceed to the final render," says JD. "But it's never really done, and you end up perfecting it until you're out of time," he chuckles. However, endlessly, obsessively perfecting your work is the only way to stay competitive and relevant in this field.

A good example is the use of VR by animators. The technology is perfect for those who want to animate and prototype concepts at incredible speed. But it does need access to some serious hardware, in addition to a top-notch VR headset of course.

Speed and Multitasking are Paramount

"Speed within Maya is more important than anything else," says JD, talking about professional animators. Things have to be as close to real-time as possible. When you’re animating a scene, the viewport render must be snappy and fast. Any delays or jitters in the viewport distract from the work at hand.

On paper, the P100 desktop looked good, says JD – there’s a lot of RAM, the RTX 2080 Ti graphics card is really good. But it’s when you actually use the machine that you realize how much of an improvement it is.

"The MSI P100 desktop managed to render out a Premiere Pro project in under 4 minutes. My old machine took about 27 minutes to render the same thing. It's crazy," exclaims JD, "it's a really fast machine, and compared to what I had before, it’s a massive improvement." 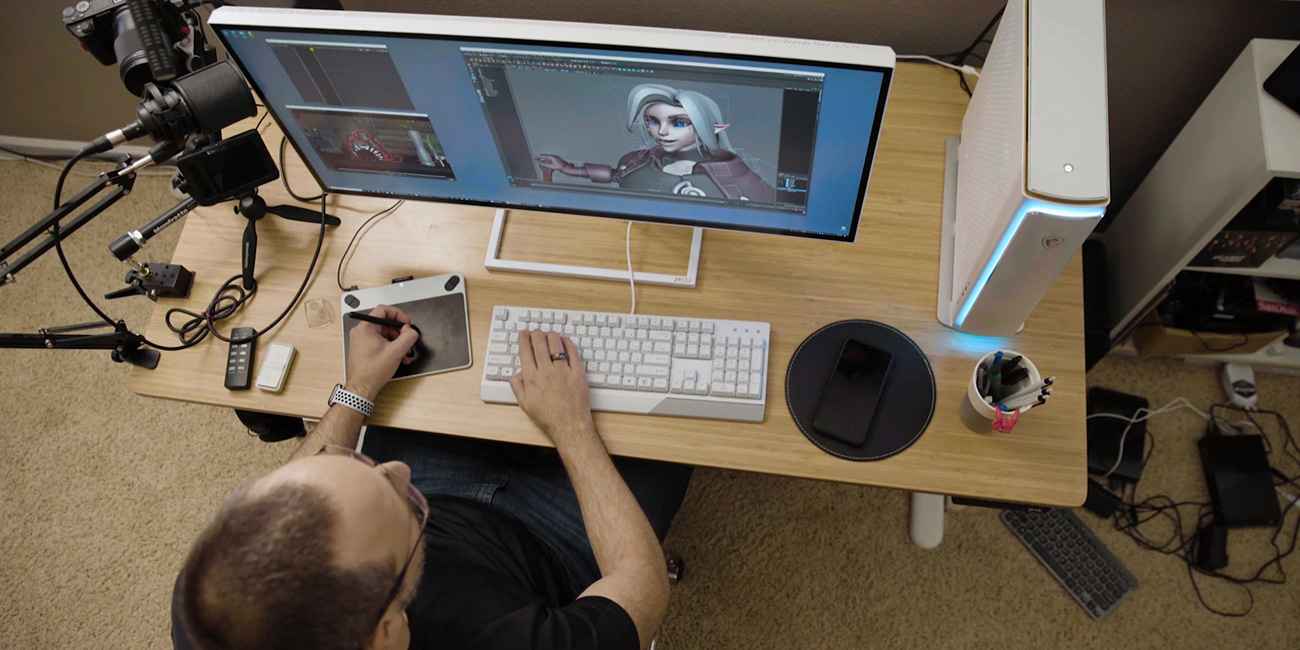 Just Another Day of Work (AZRI rig by Matthew Bachnick)

It's not just the difference in performance within a single application for JD. "Using the P100, I can render out of Photoshop, Premiere Pro, or Maya, and still do other things, which is a big thing,” he says. His work involves recording and rendering out lectures. However, waiting around while that saves out is neither productive nor enjoyable. Now, even while the renders are happening, the MSI P100 lets JD animate or create another lecture without experiencing stutter.

Another feature that excited JD was the VR-ready USB port on the desktop. Many animators are beginning to use VR to draw and generate animation concepts in 3D space, before porting that into Blender or Unity or something similar.

“VR is one thing I’ve really wanted to try."

"“"The desktop seems powerful enough to handle something like that," exclaims JD, "“"it's just perfect."

For an animator, screen real estate within Maya isn't that critical. "But I can see more on the ultra-wide," says JD. In addition to having his animation scene open, he can have the graph editor, his reference video, and assets all open without having to switch windows or switching screens, "It's really convenient," says JD.

"I can have Premiere Pro open, plus things on the side for assets and emails."

It's really helped him with multi-tasking and juggling multiple applications without needing to relegate anything to the background.

His experience with MSI’s creator center was fantastic as well. “It allowed me more control and gave me immediate access to the core functions of the machine," JD says, "if I needed to put more compute power towards one application, I could do that. Easily. It's great!"

JD saves a whole lot of time when using the MSI workstation for work – leaving a lot more time for him to do the things he loves. Less time spent waiting on production tasks to complete and more time to continue working and wrap up work faster than ever. In his free time, he loves watching movies and TV shows, playing games, swimming, and so much more.

From award-winning works ranging from The Little Prince to Bone Mother, Dale and Sylvie’s portfolio of work is nothing short of spectacular. For Dale Hayward and Sylvie Trouvé, work and life are irreversibly intertwined. And they wouldn’t have it any other way! They’re married and are accomplished professional stop motion animators who co-founded See Creature Studios in Montreal.